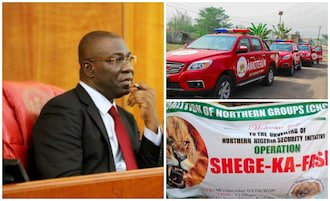 A former deputy Senate president, Ike Ekweremadu, has said that with so many ethnic diversities in Nigeria, community policing will not work.

Claiming that many Nigerians are living in denial, Ekweremadu said that the security condition in the country is not only bad but unbearable, The Cable reports.

He said that as a federal system, what should be done is a decentralisation of the police, not community security outfit like Amotekun and Shege Ka Fasa because they will operate in ways completely different from what is prescribed in the constitution.

Ekweremadu said that the security condition in the country is not only bad but unbearable.
The former deputy Senate president said: “Amotekun is different from what the federal government is saying about community policing.

“They have personnel who are going to deal with issues unlike what the federal government is proposing.”

Moreover, he said that the creation of regional security initiatives is proof that people have lost trust in the ability of the government to ensure their security.