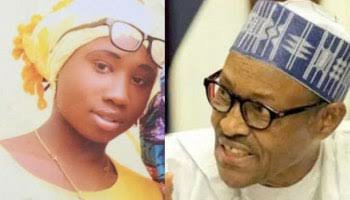 It was recently learnt that much earlier in the days of her abduction, there was a fast move by the federal government to free Leah Sharibu, one of the Dapchi, Yobe state schoolgirls taken away by terrorists in 2018.

A dependable government source said third parties were brought into the picture with the aim of paying a ransom in a bid to secure Sharibu’s release.

However, the abductors, who had made the financial demand, were said to have backed out when payment was offered.

The impeccable government source further told Legit.ng late Sunday, February 16, that the money was ready to be delivered when the terrorists who had made the request, suddenly changed their minds.

The source said the government of Buhari has not rested in its promise to secure Leah’s freedom
Though he failed to mention the particular amount, he simply said it ran into “tonnes of millions of naira.”

In December 2019, the Nigerian government disclosed that it was making efforts to secure the release of Leah.

The source further explained that while the channels of communication between top security agents, third parties and the terrorists at times take more than a month to complete one line of messages back and forth, the federal government, at that period, reached an agreement after such a long communication procedure only to be frustrated by the terrorists at a time the agreement had been sealed.

“In the circumstances, the FG determined to secure the release, requested for an explanation as to the sudden refusal to receive the ransom by the terrorists only to be told by some of the third line communication channels that the terrorists decided they would never accept a ransom on Leah because they hoped to use her abduction to rankle religious passion and possibly cause a religious war in the country if they could,” the source told Legit.ng

He added that the government remains strongly committed to securing the release of Leah and all other identified and unidentified abductees by any means necessary.

He said it was because of the motive of the terrorists to use Leah to fan the embers of religious tension that made them reject the ransom government security agencies prepared to pay them.

According to him, despite the recorded frustration, top presidential officials encouraged the government to remain actively engaged with the channels of communication and the negotiators until a positive resolution is secured.

He stressed that President Muhammadu Buhari has set a firm target and resolve to ensure the freedom of Leah and others by any means necessary.

Recall that Leah and others between the ages of 11 and 19, were, on February 19, 2018, at 5.30 pm, kidnapped by the Boko Haram terrorists from the Government Girls’ Science and Technical College (GGSTC) in Dapchi.